My novel, The Devil’s Nebula, the first volume in the Weird Space series, is now available as a free e-book from Rebellion… 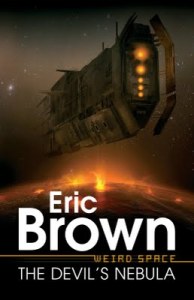 Ed Carew and his small ragtag crew are smugglers and ne’er-do- wells, thumbing their noses at the Expansion, the vast human hegemony extending across thousands of worlds… until the day they are caught, and offered a choice between working for the Expansion and an ignominious death. They must trespass across the domain of humanity’s neighbours, the Vetch – the inscrutable alien race with whom humanity has warred, at terrible cost of life, and only recently arrived at an uneasy peace – and into uncharted space beyond, among the strange worlds of the Devil’s Nebula, looking for long-lost settlers.

A new evil threatens not only the Expansion itself, but the Vetch as well. In the long run, the survival of both races may depend on their ability to lay aside their differences and co-operate.

Free eBook of the month – September