The Disciples of Apollo, the Best of Eric Brown, PS Publishing, 2019

This volume collects Eric Brown’s finest short fiction, from the contemporary title story, in which victims of a terrible malaise retreat to a sequestered island to see out their final days, to the far future of “Dark Calvary”, set on the dying world of Tartarus Major whose sun is about to go nova.

Whether set in in space in the future, or Earth of the here and now, Brown’s stories are imbued with a passionate concern for the human condition and the need to deliver compelling narratives.

“The Children of Winter” and “Hunting the Slarque” won the BSFA Award for the best short story of 1999 and 2001 respectively, while “Zarla’s World” is original to the collection. 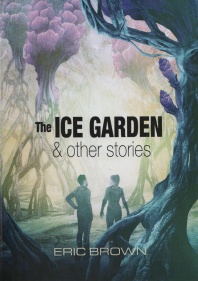 The Ice Garden and other stories, PS Publishing, 2019

The collection gathers eight stories as varied in space and time as they are in theme, and features such tropes as alien visitors, space opera, near future satire, cloning, and even murder-mystery. “Conway and the Aliens” is set in my popular Starship Seasons future, while “Dimensions of Deceit” is the latest tale in the Salvageman Ed series. “The Trees of Terpsichore Three” is a collaboration with Michael Coney. Three stories are original to the volume.

The Spacetime Pit Plus Two, Infinity Plus Book, 2018

The Spacetime Pit Plus Two collects three collaborative stories by two of the genre’s finest writers. Never before published in one volume, the triptych showcases the authors’ ability to create narratives on a vast scale, and yet never to loose sight of the all-important human element.

In “The Spacetime Pit” spacer Katerina Wake crash-lands on primitive alien world and faces certain death unless she can harness her ingenuity, and technical know-how, to bend the destiny of an entire race to her will…

In “Sunfly”, Onara and her people live on a world very different from our own – a vast ribbon encircling a sun. But a change is coming to the land, a mysterious narrowing that threatens not only the stability of her world, but the very order of everything she has taken for granted. 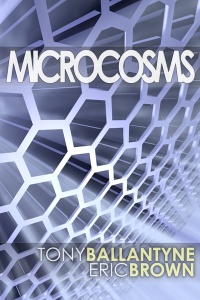 Microcosms, by Tony Ballantyne and Eric Brown, Infinity Plus Books, 2017

Philip K. Dick Award nominated writers Tony Ballantyne and Eric Brown bring together forty-two fantastical short-short stories, featuring new takes on every SF trope from alien invasion, robots, and time-travel, to stellar exploration, the future of computing, and the nature of the human soul. Tony Ballantyne is the author of the acclaimed Penrose hard SF novels, Twisted Metal and Blood and Iron, as well as the groundbreaking and surreal fantasy novels Dream London and Dream Paris. Eric Brown has written many SF and crime novels including The Kings of Eternity, Kethani, and The Serene Invasion. Together they are a hundred years old.

Rites of Passage, Infinity Plus Books, 2014

Rites of Passage is a collection of four long stories, one of which has never appeared anywhere before. The original, “Beneath the Ancient Sun”, is set on a far future Earth where giant crabs and a swollen sun threaten humanity’s existence. The three other tales are “Bartholomew Burns and the Brain Invaders”,  a Victorian steampunk romp wherein the eponymous hero saves the world from alien invasion;  “Guardians of the Phoenix” in which a band of humans cross a lifeless desert in search of water in a post-apocalyptic world, and “Sunworld” which charts the journey of a young man who makes a discovery about himself and his world that will change everything forever. 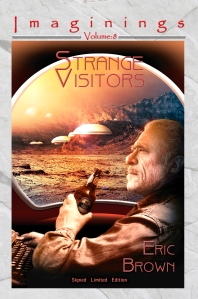 Strange Visitors collects ten short stories and contains an original “P.O.O.C.H.”, written especially for this volume – a semi-autobiographical (in the loosest sense) account of owning a dog. Last year we acquired Uther, a red and white setter, and our lives have never been the same. The fine cover by Jim Burns illustrates one of the stories, “Bukowski on Mars, with Beer”, and shows Buk on Mars… with beer.

The Angels of Life and Death, Infinity Plus Books, 2013

The collection contains ten tales of science fiction. The first six stories are what I call core SF – stories set in the future (with one exception) and featuring the staple tropes of aliens, telepathy, star-travel, futuristic sports, etc. The last four tales are more contemporary and character-oriented, while still rooted firmly in the science fiction genre. My favourite among them all is the title story, which pre-dates, and foreshadows, the Kéthani sequences of stories. An alien race comes to Earth bearing a gift from the stars…

Ghostwriting is now available as an e-book and as a real, solid, print and paper object from Infinity Plus Books. It’s a collection of all my horror tales to date (excluding the novella A Writer’s Life), contains eight stories and an introduction.

I’m proud of the book. I don’t write many ghost/horror tales, but I enjoy them when I do. 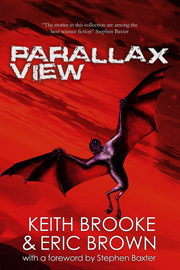 This is a reprint of our joint collection first published in 2000. It drops the two solo stories from that edition and replaces them with an original novella, “In Transit”: Abbott is a xeno-psychologist, sent into a war-zone to escort back to Earth the first ever captured member of the deadly enemy, the alien Kryte. When they crash-land on the fortress world of St Jerome’s, the Kryte prisoner turns the tables  and takes Abbott into terrible custody. What follows is a terrifying journey across a hellish landscape towards a finale that might change the destiny of the Kryte, and humanity, for ever.

This collection features two stories which won the BSFA: “The Children of Winter” and “Hunting the Slarque.” The first is a tale of a hopeless love affair between aliens on a remote ice-bound world in the far future. In the second, Hunter is resurrected from death by the owner of an extraterrestrial zoo and sent to the dying world of Tartarus in search of the creature that killed him, the Slarque.Three stories are set in the Kéthani universe. The Kéthani are aliens who arrive on present-day Earth and offer immortality, creating moral and ethical dilemmas for the humans who chose to accept – or reject – the alien gift. “Thursday ’s Child” is the story of parents whose daughter is dying; one wants the Kéthani to save their daughter, while the other is convinced, on religious grounds, that such restoration is wrong.

In myth Tartarus was the lowest region of hell. So low, it was said, that an anvil dropped from heaven, having taken nine days and nights to reach Earth, would take a further nine days and nights to reach Tartarus. But in reality things were very different… These are the stories of the people who are leaving Tartarus, those have decided to stay and those who are arriving on the planet for the apocalypse. 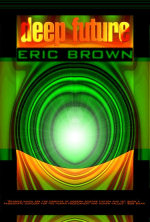 A collection of stories published by Cosmos Books in the States. Deep Future contains some of my favourite later stories, first published in such magazines as Interzone, SF Age  and Spectrum SF.

My second collection of stories, reprinted from the anthologies Zenith 2, Other Edens 3, and the magazines Interzone, and Strange Plasma 1. Two pieces, the love story “Song of Summer” and the long novella “Blue Shifting”, are original to the collection. 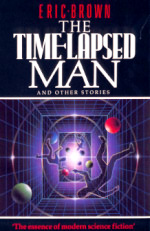 The Time-Lapsed Man and other stories, Pan Macmillan, 1990

My first book, my first collection, is of course dear to me. It contains “The Time-Lapsed Man”, which might be my best short story, six other tales, and the novella “The Inheritors of Earth”, which is original to the collection, as is  “Pithecanthropus Blues”.

I wrote these stories, among others, over a period of three years after returning to England from India. The book contains all my early work first published in Interzone.