I’ve written science fiction, fantasy, horror and slipstream reviews for the Guardian newspaper for almost a decade, and before that infrequent pieces for Infinity Plus, Paperback Inferno and Vector. In that time I’ve covered hundreds of books, from the excellent to the execrable, and all shades in between. For the most part the work has been a pleasure – and the greatest pleasure, perhaps, has been discovering writers I would not normally have come across. On the downside are the very few books so bad that they undermined my faith in the written word (they shall remain nameless).

It’s far easier to write a review of a book you like. You’re enthusiastic, for one thing; you have more to say about the work. It’s far, far harder to write a negative review of a bad book, a book which was obviously hacked out by a cynical writer for nothing more than the pay cheque. (That, as opposed to a bad book written in all honesty by a writer trying their best, but who just isn’t very good. I can accept that, and what I do when one of these creatures come along is, more often than not, ignore it).

Which brings me to the title of this piece – a word I’ve never used, and could only use in this context by ring-fencing it with quotes. “Meh” is a lazy, meaningless word that’s been cropping up with nauseating regularity of late. I believe it had its origins in America, but I’ve noticed that Brits and others have been using it too.

I first noticed it when someone sent me the link to a page on Goodreads with review of my novel The Kings of Eternity. Now Goodreads is a good idea, a forum for book-lovers to express their opinions on books they love (and hate). It contains some good, perceptive analysis, and the usual amount of ill-thought-out dross. (I recall someone criticising Aldous Huxley’s novel Those Barren Leaves for being too old-fashioned! This novel was written in the early 1920s!) In general the reviews of The Kings of Eternity were positive, but one fellow had a one word response to the novel I’d spent ten years, on and off, writing, and that one word was “Meh”.

To me, that response strikes me as a signifier of intellectual bankruptcy. If you have nothing to say about a book, then say nothing. If you disliked a book so much that you’d like to dismiss it, then have the courtesy to do so in a thoughtful, reasoned manner. Your criticism, if perceptive and constructive, might even have a beneficial effect on the writer – he or she might learn from it, might be influenced not to repeat their mistakes, might even write a better book in consequence next time.

Farcical, stultifying, one word-dismissals of a book might be a cathartic release for the intellectually challenged, but that’s all they do achieve: point up the mind-set of the perpetrator rather than the qualities – or lack of – of the book in question. 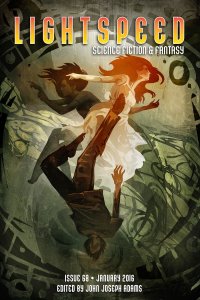 My latest short story, written with Keith Brooke, “Beyond the Heliopause”, is out now in Lightspeed magazine. It’s the tale of one woman’s discovery of something very strange lurking on the edge of the solar system. More information about Lightspeed here.

“The Ice Garden” should be appearing in the anthology Improbable Botany, edited by Gary Dalkin, in February.

“Starship Coda”, the ten thousand word wrap-up of the Starship Season series, will appear as a chap book this Easter from PS Publishing. Set ten years after the events depicted in the final volume of the quartet, Starship Spring, it recounts what happens when David Conway is visited by his ex-wife on the colony world of Chalcedony, Delta Pavonis.

Microcosms, a collection of short-short stories, will appear from Infinity Plus Books later this year. It will contain forty short-shorts, twenty by Tony Ballantyne and as many by me.

On the novella front, I’ve just submitted the third Telemass novella, Reunion on Alpha Reticuli II, to PS Publishing. It will be out later this year.