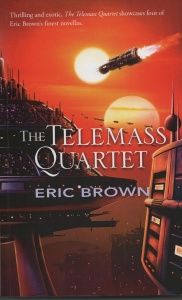 The Telemass Quartet, a fix-up novel featuring the four Telemass novellas plus the coda, is out now from PS Publishing.

The novel follows Matt Hendrick on his long, long journey across the Expansion to the planets…

Fomalhaut IV… Hendrick Telemasses to planet of Avoeli to track down and rescue his kidnapped daughter. What he finds on the easy going backwater colony is a bizarre religious cult and a race of aliens whose rituals promise to bring the dead back to life. Accompanied by the enigmatic Tiana Tandra, herself attempting to locate a missing loved one, they discover the terrible secret buried deep in the heart of the Avoelian jungle.

Spica III… The planet of Kallithea is starting its punishing five year winter. The planet is slowly closing down, its inhabitants retreating far underground to await the arrival of summer. To this inhospitable ice-bound world comes Matt Hendrick, searching for his ex-wife and his daughter, along with his old friend Ed Miller seeking to arrest the installation artist Katerina Nordstrom on a charge of murder. What they find on Spica III is a cult whose charismatic leader demands nothing less from his adherents than the ultimate sacrifice: suicide.

Alpha Reticuli II… Hendrick comes to the world of Tourmaline, the luxury resort planet to which millions of tourists from across the Expansion Telemass every month. There he meets a telepath who offers to help him trace his ex-wife and daughter, but all is not as it seems… Soon it will be Starship Day – when an ancient starship will arrive in orbit at the end of a voyage lasting five hundred years, bringing much more than Matt expects. And when an alien Effectuator claims he can bring Matt’s dead daughter back to life, Matt finds himself caught on the horns of a dilemma.

Bellatrix I… Hendrick is approaching the end game. His lover, telepath Mercury Velasquez, has traced Matt’s ex-wife and his daughter to the planet of Beltran, Bellatrix I, home of the advanced but reclusive alien race known as the Vhey… But why have his ex-wife and her lover Dr Hovarth taken Matt’s daughter to Beltran? Are they in search of an alien cure for the girl’s illness?

Hendrick and Mercury Telemass to Beltran and find a secretive artists’ colony ruled by the renowned crystal artist Edward Lincoln – and discover the secret of Lincoln’s fascination with the Vhey.

In a moving and horrific dénouement, Hendrick at last finds his daughter – but she is in mortal danger from a source other than than the natives of Beltran…

Coda: When Matt Hendrick’s wife Mercury is lost while talking a Telemass trip from Mars to Earth, existing in a state neither dead nor alive – but in an ‘indeterminate state’ – he finds himself in an indeterminate state himself, torn between grief and hope. Hendrick had planned to take Mercury and his daughter Samantha on a trip to distant stars, retracing the journey he had made years earlier while attempting to rescue Samantha.

Coda is the moving finale to the The Telemass Quartet.

2 responses to “The Telemass Quartet”